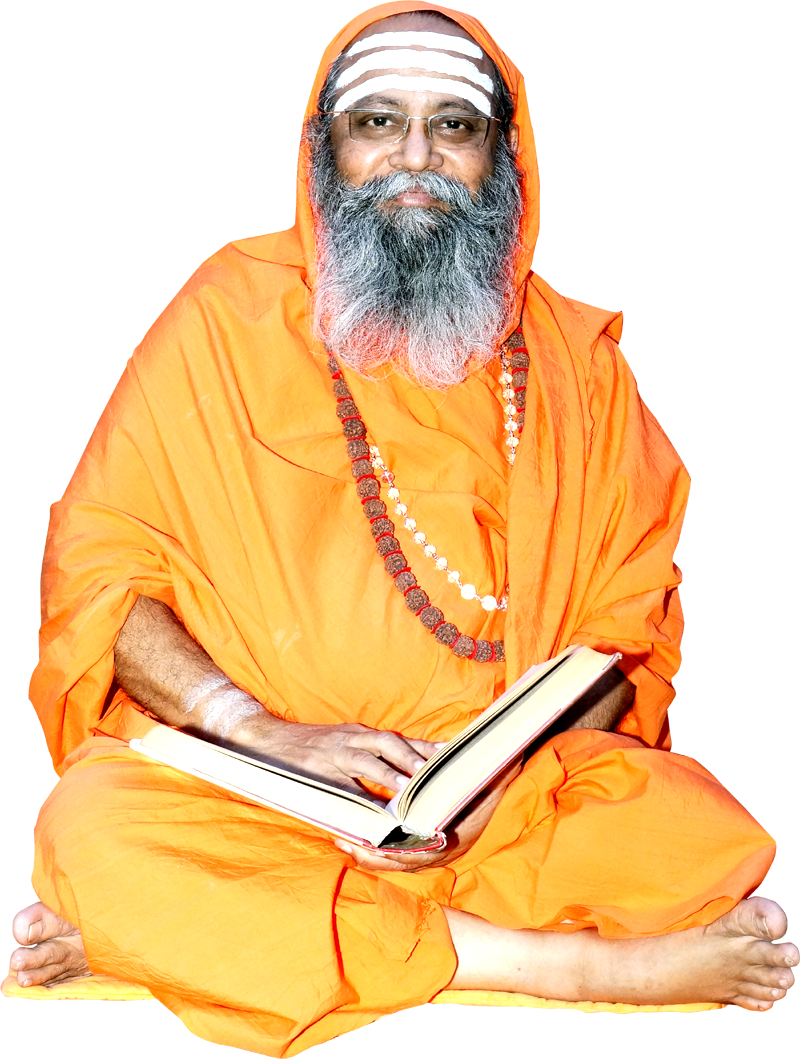 Pujyasri Omkarananda Mahaswamigal has taken up the sacred mission of rejuvenating the spiritual values and the cultural traditions of India.

Born in a family steeped in tradition and culture, he adopted the Vedic lifestyle from an early age.

An erudite scholar par excellence, he was a Ghanapathi in his Purvashrama, well versed in both the Veda Purva and Veda Anta Bhagas. His eloquence and mastery, both in Tamil and Sanskrit, have earned accolades and words of praise, from learned Pandits across the country.

He had the Sanyasa Diksha from Pujyasri Swami Chidbhavananda, the founder of the Sri Ramakrishna Tapovanam, Thirupparaithurai.

Pujyasri Swamiji has established Vedanta Sasthra Prachara Trust, through which he trains his students and devotees, on the spiritual ways of life. And inside the Ashram, he has established through the Sri Dakshinamurti Seva Samiti, the Adiguru Sri Prajna Dakshinamurti Vidyapitham, for Chitta Shuddhi & Mana Shanti. Through his eloquent discourses, he drives home the deep insights, of the Bhagavad Gita and the Upanishads, in such a simple manner, that even a common man can comprehend them, with ease.

He expounds the essence of some of the sacred texts in Tamil, such as Thevaram, Thiruvachakam, Thirumandiram, Thayumanavar’s hymns, Bharatiyar’s songs and Thirukkural, in particular.

Pujyasri Swamiji interacts freely with the people from all the strata of the society, without any discrimination of - caste, creed, age, economic status or education - and attracts them through his compassionate words and friendly demeanour.

It is no exaggeration to say that, all those who have been attracted by his teaching, are rooted in spirituality, lead a purposeful life of righteousness and love, and enjoy inner peace.

Swamiji’s Lakshyam or Goal is “Anaivarukkum Endrum Amaidhiyana Anandam” - “Peaceful Happiness for All, at All Times”. He drives this home, by spreading the message of our Sasthras, which he has been doing for the past 30 years. His uniqueness lies, in his being a single source of all spiritual knowledge, and at the same time his flexibility, in blending and adapting it to modern times and technology.

The core purpose of his establishing the Ashram, was to make it grow into an Uttama Vidyasthanam, with an ever increasing Sannidhyam. The Agni Global Classroom and the recently started Atma Vidya course, are a part of this vision and mission of his, to establish such a Vishwa Vidyasthanam of excellence.

Pujyasri Swamiji now devotes most of his time and efforts toward transferring and imparting, all his vast and deep knowledge of our Sasthras, by using the latest technologies, to the current generation and preserving it, for all the future generations to come.